Experts have predicted 3 major evolutionary changes in the automotive industry by 2030Cars will change in the next decade more than in the last century. And that's probably a good thing, because cars account for a significant share of global carbon dioxide…

Elon Musk: Tesla is successful because we were not taken seriouslyIn celebration of its 70th anniversary, MotorTrend magazine interviewed Elon Musk, a man who has changed the modern automotive world in many ways. In this interview, the CEO of Tesla…

Which is better: a fully electric car or a plug-in hybrid? 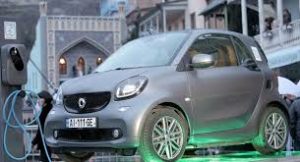 The rivalry between clean electric cars and plug-in hybrids is now reaching its highest peak of confrontation. Many agree that clean electric vehicles are the future, but also pay tribute to plug-in hybrids as a transitional stage to the further development of the all-electric era.
To finally understand the issue you need to analyze how long the plug-in hybrids (PHEV) will be relevant, having considered several interesting questions.

How much reserve electricity to clean enough?
We all know that the essence of plug-in hybrid technology is that cars of this type, especially new ones, are able to pass on a clean electrician quite an impressive number of kilometers. However, if you ask any plug-in hybrid driver if he wants the car to have a larger power reserve, almost 100% will say Yes. This is probably due to the fact that many owners of plug-ins faced with a situation where the electric charge was not enough and had to resort to the services of a gasoline engine, after which all a little environmental car disappears.
Here lies the main issue of priority between a clean electric car and plug-in hybrid, because it all depends on how you use the car.

The diagram above shows the relationship between the power reserve of a clean electrician and the distance traveled by the driver of the car. When drawing up the diagram, the average trip by car at a distance of 50-65 km (30-40 miles) per day was taken into account.
Of course, these data are variable and will be different for each driver, but this is not important, but the fact that the power reserve of the plug-in hybrid on a clean electrician does not exceed 80 km (50 miles). Therefore, in the diagram, “the end of 100% eco-friendliness and efficiency” hybrid plug-in ends at the mark “Sweet Spot”, after which the efficiency of the purchase plug-hybrid, as an eco-car is reduced in ascending and completely disappears at 130 km (80 miles).
Thus, people who need to drive 130 km in the electric range do not need a plug-in hybrid, they need a clean electric car.

This diagram will help not only to calculate the environmental efficiency of the car, but also to estimate which of the plug-in hybrid models will satisfy the needs for environmental driving. For example, plug-hybrids such as Toyota Prius Prime and Kia Niro PHEV, are at the bottom of the mark “Sweet Spot”, and Chevrolet Volt (which unfortunately removed from production) and Honda Clarity PHEV — at the top of this mark.

Who will be more affected by the drop in battery prices?
For anybody not a secret that the whole electric world is waiting for lower prices for batteries. In the context of rivalry between PHEV and BEV, I wonder who will benefit more from falling prices?

In General, it is beneficial to both categories of cars, but for a clean electric car (BEV) that wants to be a competitive model, the battery capacity should be at least 40 kWh, and better more. A good hybrid plug-in costs a 10-12 kWh battery. At the same time, if you drop the battery and calculate other production costs, the hybrid plug-in (PHEV) will always cost more. Therefore, as the following diagram shows, when the price of the battery drops below $150 per kWh, electric cars will become cheaper faster.

In the context of our analysis, this suggests that over the next 5-10 years, electric vehicles (BEV) with a power reserve of 240 km will be competitive in cost with plug-in hybrids (PHEV), and will even be able to compete in price with conventional ice cars. Other electric cars with great reserve are yet to lose a competition PHEV and even the internal combustion engine at its cost.

However, we talk only about the purchase price, digging deeper and including operating costs here, it becomes clear that PHEV and BEV are likely to be winners over traditional ice, although much will depend on the prices of petroleum products.

There is another caveat that should be considered when reducing the price of batteries that many manufacturers already produce conventional hybrid cars “without a plug”. With cheaper batteries, it will be almost no trouble for them to take an 8 kWh battery to connect the charger and name the PHEV model. The cost of such development is minimal, because the car was 95% designed in advance.

What will this lead to? Yes, to the fact that the fall in prices for batteries in the near future will contribute to the emergence of a much larger number of plug-in hybrid models than pure electric cars, the development of which requires great engineering effort and investment. Also, if the manufacturer has already sold the hybrid version at a profit, then it is likely that PHEV will also be profitable, so there is usually much less risk in converting the model to PHEV.

Should the connected car have a quick charge?
The essence of the answer is that the plug-in hybrids do not depend on the charging infrastructure, and their functionality suggests a completely different approach to operation, when the determining factor is not the speed of charging the battery, but the presence of an engine that can recharge this battery or be used as a power engine.

In addition, not everyone puts in the concept of fast charging for PHEV the right meaning. If you think that on a fast charging station a clean electric car charges up to 80% in 30 minutes, and PHEV with a battery of a smaller capacity will charge in 5 minutes, you are mistaken, because the time will be the same. The difference is that charging the electric car for 30 minutes you get 150 km of mileage, and charging PHEV for the same time you get 30-40 km. We certainly do not claim that it is meaningless, but not as profitable as you think.

Reasons to buy hybrid plug-in (PHEV) instead of pure electric vehicle (BEV):
Availability. Now plug-in hybrid models more than clean electric vehicles.
Design. Again, there are more variants of PHEV models than BEV.
No charging infrastructure for a clean electric vehicle, while PHEV is less demanding on constant charging, especially if used regularly.
Dealers. Let’s be honest and say that dealers are not very fond of electric cars that “take their bread”, but more loyal to PHEV, because the process of sales and service as in cars with ice.
Ignorance of the industry. Electric cars despite the mass appearance are still “terra incognita” for the average consumer. This applies to many areas, including customer or dealer ignorance of the benefits of clean electric vehicles.
Reasons to buy an electric vehicle (BEV) instead of a plug-in hybrid (PHEV):
Less maintenance. PHEV still require oil change and other service related to the engine.
More energy regeneration.
Instant torque. BEV is almost always faster than similar PHEV.
More interior space. Created from a “clean sheet” electric car will have more internal space and storage space, as the battery will be placed under the floor. PHEVs often have even less space than cars with ice because the usable space “eats up” the battery.
“100%” environmental friendliness.
In countries where there are benefits for the purchase of electrified cars, the BEV tax credit is always greater than the PHEV (while this credit still exists).
As a conclusion, we note that plug-in cars will be very common over the next 10-15 years. Once it becomes clear to the General public that electric cars are the future of cars, plug-in hybrids are likely to disappear. However, the main reason would rather be that by this point the hybrid plug-in will cost more than a car with an engine, and is much more expensive than most models of electric vehicles.

Potentially, plug-in hybrid trucks may be the last representatives of PHEV, because they can be more cost-effective than trucks with huge batteries. However, let’s see, the future is uncertain and will show who will win.